Night World is a series of ten (with the tenth as yet unpublished) young-adult fantasy novels by American author L. J. Smith. The series presents a story in which vampires, witches, werewolves, and shapeshifters live among humans without their knowledge. These supernatural races make up a secret society known as the Night World, which enforces two fundamental laws to prevent discovery:

Each volume of the series follows a different protagonist (always a teenage girl) who must face various challenges involving love, the soulmate principle and the Night World's strict code. In the first six novels, the plot focuses on the protagonist discovering her soulmate and the danger which ensues. In the seventh book of the series, the concept of an impending millennial apocalypse is introduced. Although the theme of the soulmate principle continues to be present, the later books' plots focus on the search for four Wild Powers who, according to an ancient prophecy, will either save the world or aid in its destruction. 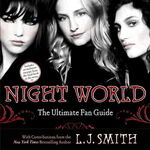 Ash and Mary-Lynnette: Those Who Favor Fire

Jez and Morgead's Night Out

Thicker Than Water
Retrieved from "https://bookclub.fandom.com/wiki/Night_World?oldid=20811"
Community content is available under CC-BY-SA unless otherwise noted.